WHAT IS FERTILITY AWARENESS?

Fertility awareness is about male and female infertility and finding out those days in a month when a baby can be conceived. Men produce sperm continually for life while a woman is fertile only for a few days each month, at the time the egg is released from the ovary. There are various ways of finding out when those fertile days occur. Understanding those aspects of fertility pattern is called fertility awareness.

Natural family planning (NFP) is used to avoid or achieve pregnancy by observing the changing signs of fertility. The three major observable signs of fertile days, common to the most fertile women are:-

These signs of fertility reflect the normal sequence of hor-monal changes which govern the menstrual cycle. NFP is a natural method of family planning based on fertil-ity awareness which enables a couple to plan abstinence from sexual intercourse when they want to avoid pregnancy or plan to have sexual intercourse in the fertile days when they want to achieve a pregnancy. NFP pre-supposes a stable relationship.

Is NFP FOR YOU?

Anyone can learn fertility awarenessacwareeneriss tahe basics Men may wish to learn about it with their partners. As a method of contraception, it does require co-operation and a sharing of responsibility for the family between the woman and the man.

The big benefit of NFP is that it does not interfere with the natural functions of your body in a way that some of the other methods do, such as the Pill. It has no health risks.

HOW DOES FERTILITY AWARENESS WORK?

Fertility awareness begins with an understanding of what happens in a woman’s body when she is fertile. Ovulation occurs when a mature egg is released from the woman’s ovary. The egg lives for up to 24 hours before it begins to disintegrate. Sperm life is different from egg life. The man’s sperm may live for a short time, or for 3 to 5 days depending on the type of mucus present in the woman’s vagina.

To identify the fertile and infertile phases of your menstrual cycle, you look at the signs of fertility which indicate that ovulation is approaching, and when ovulation has passed, you record your observations on a chart and eval-uate them.

Each woman is unique and has her own individual fertility pattern, which a teacher of NFP can assist her in learning to recognise.

Once you have taken your temper-ature, you can mark it on a chart. It is fairly easy to find out when the time of fertility is over for that cycle because your temperature rises immediately after ovulation.

The second way you can find out when you are fertile is by observing the changes in the fluid in your vagina —this is called cervical mucus. During the menstrual cycle, mucus is produced in tiny pockets in the cervix, the small round structure which extends into the vagina from the uterus or womb. The appearance, texture, and amount of this mucus changes in response to changing hormone levels.

As the body prepares for ovulation, a woman usually notices a mucus which first appears white and creamy, or thick and sticky. Close to ovulation the mucus increases in quantity and becomes wet, stretchy, slippery and much clearer, like a raw egg-white. 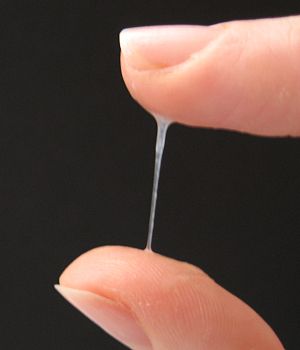 You may be able to stretch a thread of it between your thumb and forefinger, as shown below. Fertile mucus nourishes and prepares sperms for fertilisation. After ovulation is finished, the fertile mucus disappears altogether and may be replaced by sticky, gluey mucus which blocks the passage of sperm.

You can learn to identify the type of mucus present by sensation. Or you can easily observe your mucus throughout the day on toilet tissue, or by placing some between your fingers, when you visit the toilet. The changing pattern should make it possible for you to know the potentially fertile time in each cycle, as well as times of infertility.

The third way is to observe the changes in the cervix or neck of the womb.
The cervix has a central opening, called the OS, through which menstru-al blood passes from the uterus, and through which sperm travels into the uterus or womb.

Not all women experience all these changes in the cervix. Some women observe cervical changes to help confirm the observations of other fertility signs. Other women decide not to check for cervical changes. This is perfectly acceptable, since the two most important signs of fertility are waking temperature and cervical mucus.

The cervix changes in position, texture, and opening during the menstrual cycle. You can check your cervix daily for these changes. Generally, the cervix is low, firm and closed during the infertile time. During the fertile phase the cervix moves higher up, and feels soft and open.

“I was so excited when I felt the changes in my cervix for the first time. Until then, I was convinced that all the wonderful changes I read about were really imaginary and would not work for me.” ANNA, 21

HOW SAFE IS NFP?

NFP is a highly effective method of contraception based on pre-cise knowledge of reproductive physiology. A recent (1993) Efficiency Study in nine European Countries showed that pregnancy rates for NFP compare most favourably with the contraceptives in current use but without their adverse side effects.

Sometimes there is conflicting advice on certain points about evaluating fertility signs. The best way to learn is through the NFP teacher helping you with your own individual case or cycle. There are many books on the subject.

ARE THERE ANY PROBLEMS?

It requires daily observation and charting which can be difficult for some working mothers. Some women find keeping a chart inconvenient. Charts can be difficult to interpret, especially during times of illness, stress and travel. Abstinence can sometimes be a problem but communication and co-operation between partners will help. NFP teachers can help with interpretation problems.

Some women who find NFP inconvenient at first do return to it later. New technology is also promising to make NFP easier and more reliable than ever before.

The two main problems of NFP have been the daily task of keeping a record of temperature and cervical mucus and then interpret-ing them to find out if it is your fertile time. A range of promising products are becoming available to aid NFP. These include digital thermometers which take a waking temperature in less than a minute, and electronic thermometers which are able to record and interpret temperature readings.

Another product is a dipstick urine test for detecting the precise beginning and end of the fertile phase by measuring certain hormone levels in your urine.
Remember, though, once you learn the basics, you have a method you can use for life once you and your partner are properly motivated into its use.

HOW CAN I LEARN MORE ABOUT NFP?

The best way to learn is from a teacher/doctor. You can also become aware of your fertility through books and videos.

SOME MYTHS ABOUT NFP

Why haven’t we heard more about NFP?

One reason is that many health professionals and doctors as well as the general public are misinformed. We want to dispel the myths about NFP.

It is the old ‘rhythm’ method of birth control and it doesn’t work.

NFP is light years ahead of the unreliable rhythm method which was based on calendar predictions of a woman’s fertile time. NFP relies on observable signs of fertili-ty which a woman can evaluate every day.

Recent studies show that NFP, when correctly taught and learned, is as effective as other modern methods of contraception. It is important to remember that no method is 100% reliable.

Is it too difficult to learn?

Any woman, no matter what her educational background , can learn NFP and with modern technology it becomes much easier to use.

It takes too much time and effort.

It does take a little time each day to observe your fertility signs, but it is not terribly time consuming. In fact many women find keeping in touch with their bodies easy and enjoyable. New technical aids make natural methods less time-consuming and more reliable.

It is mostly used by people with moral or religious views, or by women who can’t use mechanical forms of contracep-tion for health reasons.

Today, women in every country are choosing to learn NFP for different reasons, ecological, absence of harmful side-effects, reliability, the sense of self awareness it can bring. Women are seeking a natural approach, as they long to avoid putting drugs and devices in their bodies. They believe this is nature’s way and since it lets them work in harmony with their body rhythms they believe it is the only intelligent method.