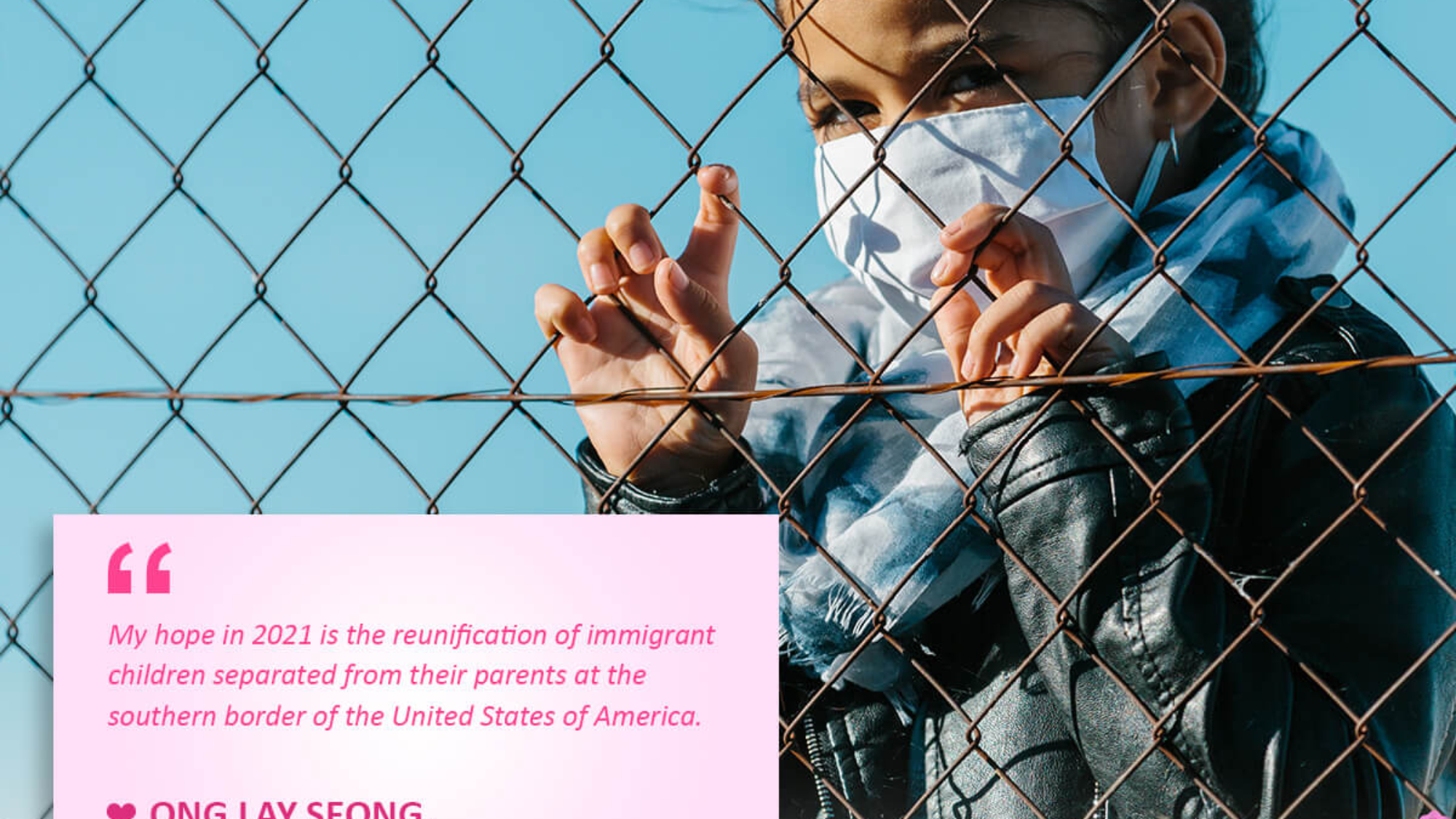 by admin
Hopes and Dreams Contest 2021

My hope in 2021 is the reunification of immigrant children separated from their parents at the southern border of the United States of America.

As of 20 October 2020, there were still 545 immigrant children who were still separated from their parents, according to a court filing with the US court.

Two weeks after his inauguration on 20 January 2017, the Trump Administrations started a pilot project separating immigrant children from their parents at the US-Mexico border.

In April 2018, President Trump’s Attorney General Jeff Session formally launched his ‘zero tolerance’ policy where prosecutors were directed to file criminal charges against those who crossed the border illegally and formally separated children from their parents who were taken into custody. Children separation was used as a deterrence against these immigrants crossing the US-Mexico border. International and local outcries against the inhuman treatment of immigrant children – legal or otherwise – forced President Trump to end his policy in June 2018.

To me, the ‘zero tolerance’ policy was actually state-sponsored violence against children resulting in more than 5,000 children being separated.

It is really painful to feel the psychological damages done on these innocent children who were torn from their parents and forced to live in cages over a long period. It is unconscionable that any sane person could come up with such a policy to punish children for the actions of the adults.

The significance and long-lasting consequences for the safety, health, development, and well-being of the children cannot be overstated. Children need to be cared for by their parents to be safe, healthy, grow, and develop. Forced separation disrupts the parent-child relationships and puts children at increased risk for both physical and mental illness.

My hope is for the incoming Joe Biden Administrations after 20 January 2021 to do the right thing.

The American people need to ensure all 545 children are being reunited with their parents. For those children whose parents cannot be reached, the Biden Administrations must find American families to adopt them into the mainstream of American life.

Americans are obligated to reach out to all thousands of immigrant children who have been victimised and traumatised by Trump’s cruel, inhuman policy. They must employ all their resources, such as their psychologist and other mental health experts, to help these children to overcome their fear and trauma so that they can return to a normal life into adulthood.

Needless to say, my dream for 2021 or after is for International or American Human Rights bodies to hold the 45th President of the United States accountable for his crime against humanity especially putting innocent children in harm’s way. I dream that these Human Rights Advocates will file a case in the International Court in Hague against Trump and his minions.

I would like to see the following individuals who have helped Donald J Trump perpetuate his crime to be charged.

They include Stephen Miller, who is Trump’s advisor and the architect of the ‘zero tolerance’ policy, Attorney General Jeff Session, and his Deputy, Rod Rosenstein, who, when asked to classify the age of children to be separated, said all including new born babies.