Agaisnt all odds, a 32-year old woman who had both her ovaries removed seven years ago, gave birth to a healthy 3kg baby boy last month using donor eggs from her younger sister.

The woman developed benign ovarian cysts and underwent a bilateral oophorectomy at the age of 25 but “I was still hopeful of conceiving one day as the doctor told me I could try for the test tube baby”.

Wishing to be known only as Jane, the shy human resource executive said she had been on hormone replacement therapy since that operation.

“I’m very happy to have my own baby now,” she said while cradling her first-born during a “full-moon” party thrown by Gleneagles Medical Center here yesterday where she conceived her baby through in-vitro fertilisation (IVF) and delivered on June 23.

Jane got married to an engineer in 1999. The couple had initially toyed with the idea of adoption if they failed to have a baby of their own. 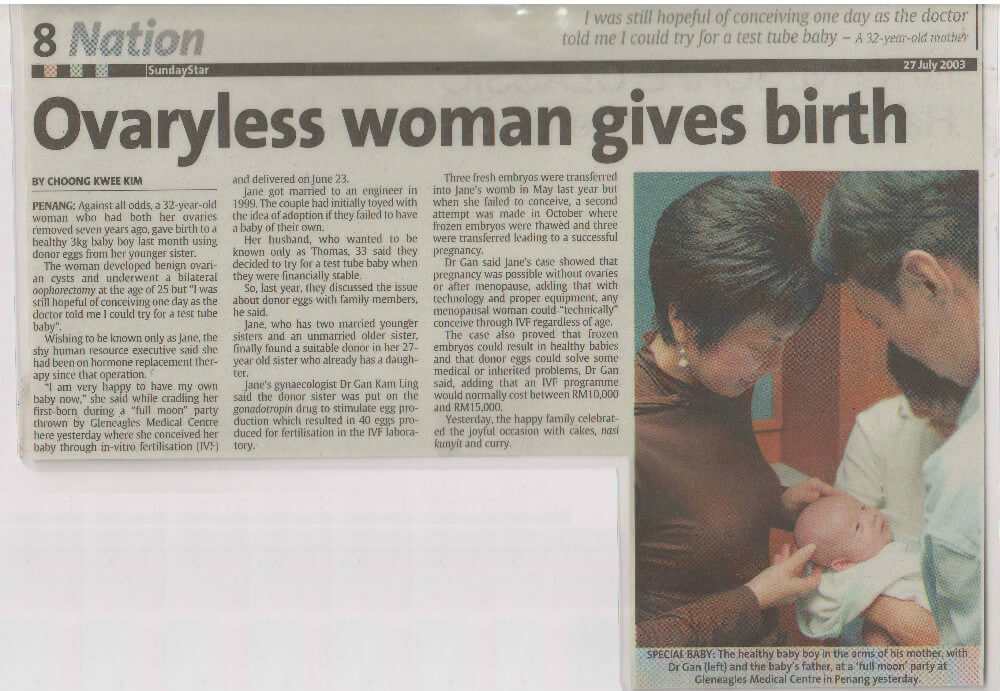 Her husband, who wanted to be known only as Thomas, 33 said they decided to try for a test tube baby when they were financially stable.

So, last year, they discussed the issue about donor eggs with the family members, he said.
Jane, who has two married younger sisters and an unmarried older sister, finally found a suitable donor in her 27-year old sister who already has a daughter.

Jane’s gynaecologist Dr.Gan Kam Ling said the donor sister was put on the gonadotropin drug to stimulate egg production which resulted in 40 eggs produced for fertilisation in the IVF laboratory.

Three fresh embryos were transferred into Jane’s womb in May last year but when she failed to conceive, a second attempt was made in October where frozen embryos were thawed to a successful pregnancy.

Dr.Gan said Jane’s case showed that pregnancy was possible without ovaries or after menopause, adding that with technology and proper equipment, any menopausal woman could result in healthy babies and that donor eggs could solve some medical or inherited problems, Dr Gan said, adding that an IVF programme would normally cost between RM10,000 and RM15,000.